The DNA of DMA

In early 1980, legendary producer David M. Allen (The Cure, Sisters Of Mercy, Neneh Cherry etc…) was holed up at Martin Rushent’s Genetic Studios unboxing & installing groundbreaking new equipment from the Roland Corporation – one of the 1st System 700 modular synths & its accompanying MC-8 Micro Composer to have arrived on UK shores.

Dave had just a couple of weeks (in the absence of Martin) to get everything up & running in time for the arrival of the Human League at Genetic. Those sessions would see them record what was to become the ultimate synth pop smash – the ‘Dare’ album !

‘The DNA of DMA’ is the sound of an early 20-something studio engineer rush-recording a slew of his own post-punk tracks into electronic form. It’s a recording that sets the blueprint for what would become known as the ‘Genetic sound’ – a sound that would rapidly dominate the airwaves the world over.

Lovingly restored from a 1/4 inch tape that David stumbled across a few years back, ‘The DNA of DMA’ is a fascinating historical snapshot of the first digitally controlled studio gear of 1980 being road-tested over his catchy & quirky song-writing & performances.

When Martin Rushent heard the tape upon his return to Genetic, David was offered a job on the spot. A job that has now spanned 5 decades but started humbly with these 9 tracks over 40 years ago… 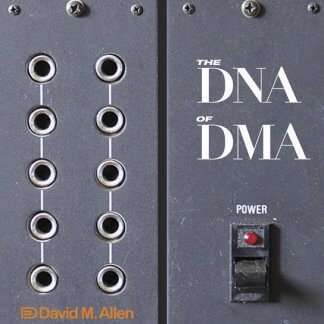 You're viewing: The DNA of DMA  £24.00
Add to basket
We use cookies on our website to give you the most relevant experience by remembering your preferences and repeat visits. By clicking “Accept All”, you consent to the use of ALL the cookies. However, you may visit "Cookie Settings" to provide a controlled consent.
Cookie SettingsAccept All
Manage consent